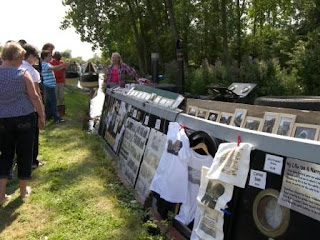 It was a beautiful warm day when Marilyn and I, made a visit, along with thousands of others to Tiddenfoot Waterside Park for the 9th annual Linslade Canal Festival in Bedfordshire, England. After talking for a while to Janul, a singer, songwriter, author and publisher, beside her very interestingly decorated narrowboat that displayed much of her achievements on its decking, we were shown ‘Raymond’ by ‘The Friends of Raymond’ the last wooden narrowboat built for commercial use in Britain and launched at Braunston in June 1958 by the Samual Barlow Coal Company. Throughout her working life, Raymond was captained by Arthur Bray along with his wife Rose and stepson Ernie Kendall. Working with motor-boat Roger, she carried coal from North Warwickshire to Dickinson’s paper mills and later on the last long distance carrying contract to Kearley & Tonge’s jam factory at Southall – “the Jam ‘Ole Run” Passing the ownership of Blue Line Carriers in 1962, Raymond continued to work with Roger and later with Nutfield until carrying on the canals of Britain ceased in 1970. You can find out more about Raymond on the website: www.TheFriendsOfRaymond.org.uk

Really, that was so much to do there at the Linslade Canal Festival, that we just can’t wait until next year and enjoy once more those Rural Craft Demonstrations, wonderful little Handcraft Stalls, much Art & Crafts, with an Arts Marquee, Canal Pleasure Boat Trips, watch Working Narrow Boats, listen to excellent music and see Morris Dancing, Catanger Lamas and take a Lakeside Walk… A truly remarkable day out!

a photographer, writer and blogger, a studio and press photographer since the mid 1960's, first published writings in 1974
View all posts by Patrick →
This entry was posted in Patrick's Words and tagged Linslade Canal Festival. Bookmark the permalink.

5 Responses to A Day At Tiddenfoot…