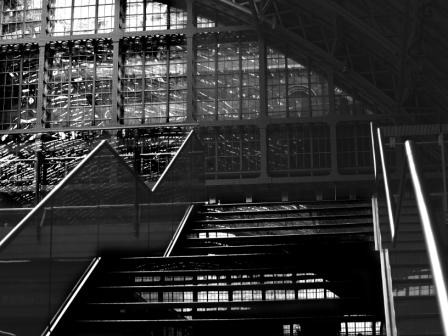 Robert Morey is deep and dark with this period evoking stairway shot inside the famous North London Victorian Railway Station of St. Pancras. Built in 1868 as The Midland Grand Hotel and Railway Station it served travellers to and from The East Midlands and Yorkshire. It’s a beautiful vision of Victorian gothic architecture. During the 2000s it was renovated and given a new lease of life as a terminal area for Eurostar Trains to Europe.

a photographer, writer and blogger, a studio and press photographer since the mid 1960's, first published writings in 1974
View all posts by Patrick →
This entry was posted in Contributors and tagged St. Pancras Station. Bookmark the permalink.