Moctezuma… King of the Aztecs 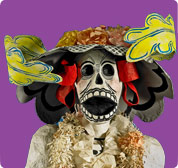 Marilyn and I just managed to squeeze into the exhibition on Moctezuma at the British Museum on Friday afternoon, after a sumptuous lunchtime meal at The Duke of Marlborough near Selfridges in Oxford Street. It was the last few days of Moctezuma’s exhibition and it was not a let down.

Moctezuma ll was the last elected ruler of the Aztecs from 1502 until 1520 and ruled over a giant empire that embraced much of central Mexico. He became a formidable warrior and ruler. Aztec was the term used to describe Mexica, and the name Mexica was adopted by the Spanish when they invaded in 1519 looking for gold and other riches. It gave rise to the modern name of Mexico.

The exhibition offered much of the treasures of Moctezuma’s notable life, including his Coronation Stone, a wonderful Turquoise double-headed serpent, and a Turquoise wood and shell decorated mask that also features on the front cover of the British Museum’s publication.

There were many, many items on show portraying the man and his life, and the two hours we spent inside the museum’s exhibition dome was completely absorbing and a real pleasure!

a photographer, writer and blogger, a studio and press photographer since the mid 1960's, first published writings in 1974
View all posts by Patrick →
This entry was posted in Patrick's Words and tagged British Museum, Moctezuma. Bookmark the permalink.