This remarkable and previously unpublished set of pictures taken by Polyfoto in the 1930’s show a more unguarded and natural Enid Stamp Taylor and thought to be taken in one of London’s large department stores. They were given to me by Enid’s daughter Robin Anne, and interestly enough there is a corresponding set taken at the same time of Robin Anne herself. Therefore, one must conclude this was a spontaneous gesture during one of Enid’s frequent shopping trips in central London.

Polyfoto were a photographic company that had instore portait studios in many large towns across the country from the 1930’s right up until the mid 70s and enjoyed their own distinctive and notable photographic system which incorporated unperforated 35mm film that in turn produced small square pictures as a contact sheet from which the sitter could choose enlargements a day or two later. However, the system became expensive and dated with the rise of the photo booth 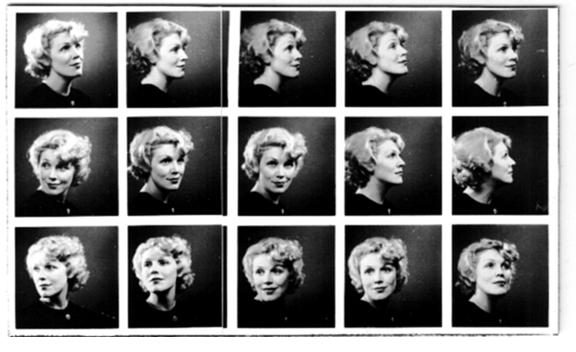