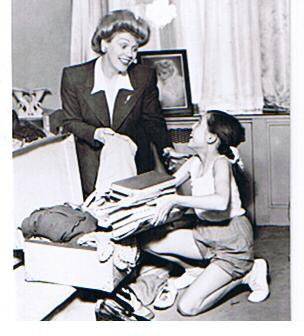 The wartime evacuation of London’s children was a very key moment in the 1940’s, and here Enid Stamp Taylor plays her part in this promotional picture taken in her Park Lane apartment. ‘Standing in’ as an evacuee is Enid’s daughter Robin Anne. The evacuation of London’s children to far-flung parts of the United Kingdom is a subject that has been well debated over the years. It was a move thankfully that could never be contemplated today.