At The Gates of Gainsborough… 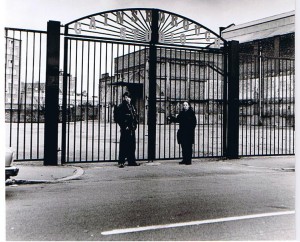 This has to be a classic shot – My Son and Daughter at the gates of Gainsborough Studios in 1995 before the building was modified. Gainsborough were based at Islington, North London until 1940 and produced many fine British films. They moved the studios to White City after fears that a German bomb could bring down the tall chimney of the one-time power station.

a photographer, writer and blogger, a studio and press photographer since the mid 1960's, first published writings in 1974
View all posts by Patrick →
This entry was posted in Patrick's Pictures, Patrick's Words and tagged Gainsborough Studios. Bookmark the permalink.