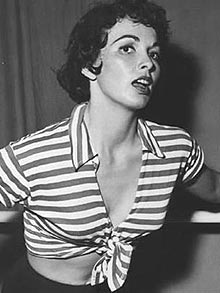 It was under the creative direction of Robert Aldrich that Mickey Spillane’s novel came to life staring Ralph Meeker and Maxine Cooper. The film is often considered a classic of The Noir Genre and Ralph Meeker’s portrayal of private detective Mike Hammer became the definitive ‘tough guy’ image of the 50s. The movie grossed a remarkable amount of money in the US and UK for a film at this time!… Britain and America were still recovering from World War II!  Sadly, Ralph Meeker died in August 1988 from a heart attack, and Maxine Cooper died only this year, at the age of 84! Maxine retired from acting in the late 1960s, making one or two cameos in the 70s, but concentrated on raising her three children. Later she became a political voice within the US and never lost the public acclaim for her performance in ‘Kiss Me Deadly’ Her great line: “Do me a favour will you?… Keep away from the window… Someone may blow you a kiss!” Shot almost entirely on location, it is a movie that is very evocative of a 1950s Los Angeles!

Film Reference: “Remember me, when no more day by day, you tell me of a future that you planned, only remember me, you’ll understand. But if the darkness and corruption leave a vestage of the thoughts that once we had… Remember me”… Christina Rossetti, British Poet 1830 – 1894

Film Reference: Cerberus, a legendary three headed hound which guards The Gates of Hell! to prevent those who have crossed the River Styx from ever escaping… From Greek and Roman Mythology.

a photographer, writer and blogger, a studio and press photographer since the mid 1960's, first published writings in 1974
View all posts by Patrick →
This entry was posted in Patrick's Words and tagged Cerberus, Maxine Cooper, Ralph Meeker. Bookmark the permalink.