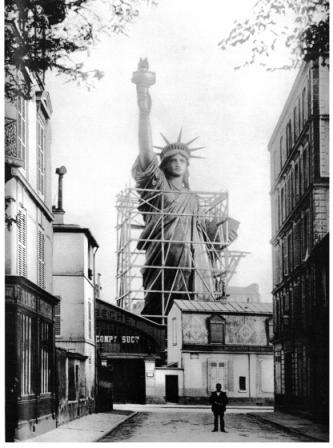 We all know this famous statue, and we all know where it stands, but less is known of its origin. Frederic Auguste Bartholdi scultured this gigantic statue and it was dedicated on October the 28th 1886.

Officially named ‘Liberty Enlightening the World’ it was built in the foundry of Gaget, Gauthier and Company, Paris, France. Under the direction of engineer Alexandre-Gustave Eiffel, later renown for his design of The Eiffel Tower in Paris.

Copper was widely used in the construction, reinforced with hammered metal on the inside, and hung on a steel framework.

At the entrance to New York Harbor – The Statue of Liberty is one of the most recognizable icons of the world, and was often the first sight of the US for many millions of immigrants from the old world!

a photographer, writer and blogger, a studio and press photographer since the mid 1960's, first published writings in 1974
View all posts by Patrick →
This entry was posted in Patrick's Words and tagged The Statue of Liberty. Bookmark the permalink.