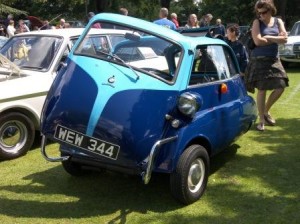 The “Bubble Car” was a strong feature when Marilyn and I, made a visit to Bedfordshire’s Classic Car Day recently in England. The “Bubble Car” was quite often of German origins, and popular in the 1950’s and 1960’s because of its low running costs. It was a two seater with the odd feature of a front opening at which its driver and passenger would embark. The “Bubble Car” had a motorcycle engine, two front wheels and one rear wheel, and I believe only a forward gear motion. It could be licenced as a motorcycle.

a photographer, writer and blogger, a studio and press photographer since the mid 1960's, first published writings in 1974
View all posts by Patrick →
This entry was posted in Patrick's Words and tagged The "Bubble Car". Bookmark the permalink.

1 Response to The “Bubble Car”