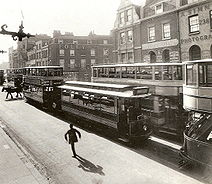 Trams were abandoned in London on July 5th 1952, after which the street tracks were taken up, however, those in the subway depots, to this day, mostly remain untouched. After the trams disappeared from our London streets, cartoons began to appear in varios London Newspapers depicting “Ghost Trams” and about the same time a BBC Radio Goon Show broadcast featured a certain Tram Driver and his Conductress who had hid in the the underground tramway for nearly three years to ensure that they were London’s Last Tram!

a photographer, writer and blogger, a studio and press photographer since the mid 1960's, first published writings in 1974
View all posts by Patrick →
This entry was posted in Patrick's Words and tagged London's Trams. Bookmark the permalink.